What is an EEG?

EEG or EKG also known as Electroencephalogram or brain wave test is used to measure the electrical activity in the brain. The test is performed in laboratories or clinics having the facility. It takes about an hour and it performed by a doctor or an EEG technician in the presence of a close relative of the patient.

How is the Test Conducted?

It is performed by using electrodes which are placed on the scalp after application of a conducting gel. Brain wave patterns are then sent as signals to a computer where they are recorded. Various stimuli are given to the patient like flashes of light, sound stimuli, reading exercises or rapid breathing to help induce abnormalities in order to record them. Patient’s eye movements may also be recorded by an eye scanner.

In various states of one’s mind, there are different waveforms which are recorded for instance, the waveforms appear to move faster when one is awake. Waveform frequencies which are greater than 8 Hz are usually considered normal in an awake adult.

In What Conditions is EEG Indicated?

An EEG is usually indicated when the brain activity is to be monitored in neurological disorders. The measurements recorded in an EEG then help in diagnosing various disorders of the brain like:

This is a question almost all patients are worried about. However, as dangerous as it may sound, this test is not harmful in any way. It is painless and safe. However, a few patients, who have a history of seizures, may have an attack during the test.

Before performing the test, like other medical procedures, informed consent has to be taken. Proper documentation is mandatory after informing the patient about the method and consequences. Here are a few things that have to be mentioned on the EEG consent form: 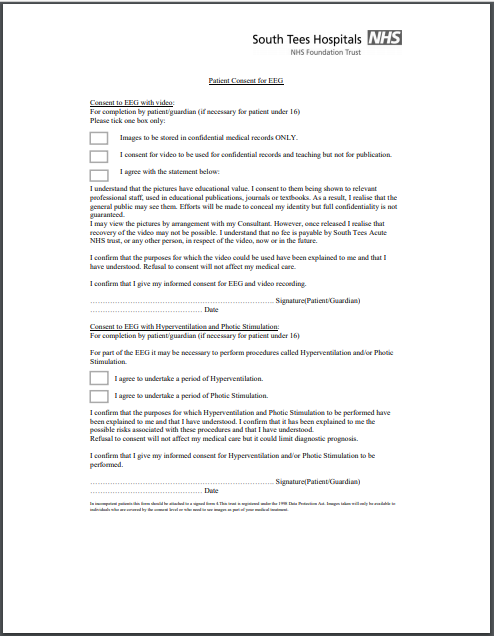