An authorization form of this kind may be found in a clinic or a hospital. It may also be found in schools whereby the school nurse may tell the student to take it and get it signed by their doctor.

After a student has taken days off school, the school will need to know what was wrong with them. If parents had already contacted the school telling them about the illness their child had, the school might then make it a policy for students who experience this to return with an authorization form from their doctor allowing them to return to school and not be a threat to their peers.

This form is used as it will permit a child to be able to go back to school after they have been reasonably cured of an illness that may no longer be contagious, and that the student is fit to participate in school activities.

Tips on composing an authorization form of this kind

The authorization form for a child to go back to school after an illness is an important form. It should be precise so that the school can easily read and find out about what illness the student suffered from and that they are fine now. 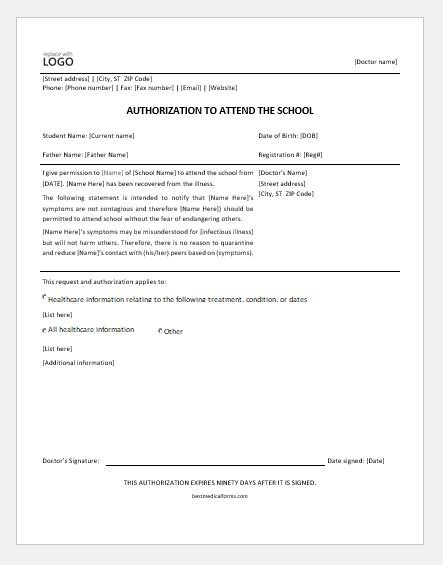