Teething is a process in which an infant starts getting his milk teeth also known as the deciduous teeth. These are temporary teeth and are always replaced by the permanent teeth beginning at the age of four to seven. Most often, these teeth appear in pairs starting from the canines.

But if the child shows teething later than that, you must see the pediatrician. Some children are born with teeth. It is a congenital condition and has nothing to do with any abnormality.

There is a sequence of teething in infants but as mentioned earlier, your child may show slight variation in the age of eruption which is quite acceptable with in certain limits.

Here is the sequence of teething and ages at which a certain pair appears. Let’s have a look at this;

Lower canines are two in number and appear first in an infant at the age of 6 months.

They appear right after lower canines at the age of 7-8 months. They also appear in pair.

Each upper incisor is present lateral to the upper canines and they appear at the age of 10 months.

They have the same arrangement around the lower canines at appear in pair at 10 to 11 months.

They are two pairs lateral to incisors and appear at 14 months of age.

They are also four in number and appear at 2-3 years of age.

These two pairs appear at the age of 6 years.

A baby gets his/her first tooth normally at the age of six months and till he/she gets three all 20 teeth are completed. But the first tooth is one of the milestones in the baby’s first year that needs to be recorded. It is a joyous time and baby is given some token or gift so that this time is remembered throughout his/her life. As a parent too, you should record this moment with all the detail like the time, date and place where the baby got the first tooth.

A baby teeth growth record does not just hold the information about how and when the baby got each tooth but also when your child starts losing his first tooth and every tooth after that. It also holds information about when the primary teeth are grown and she’d and when permanent teeth erupt.

This teeth eruption chart holds the normal growth age for the growth and shedding of each tooth and you can insert the age your child achieved that milestone, this enables you to evaluate if your child is growing normally or you need to consult a doctor.

Your baby’s teething record will most likely resemble your childhood record. Although each and every kid has a unique pattern it usually runs in family to follow a set pattern.

Monitoring each and every step in your baby’s growth is important and keeping a good tooth record is equally vital to monitor your baby’s healthy development.

Celebrate each time your child grows a tooth or sheds one as tooth fairy is one of the most cherished childhood memory in every kid’s life.

A baby’s tooth chart is maintained according to the above-mentioned sequence and is used to compare the normal reference ages. This gives us a good idea of the baby’s growth status and helps the mother decide when to visit a doctor.

A baby’s tooth chart is filled by simply adding the name, gender, and date of birth of the baby. This diagram in the chart may appear complex but it is very simple.

You just need to mention the date at which that certain pair of teeth appeared. For example, the first incisors appeared at 6 months, you will write the date in front of the line labeled as 1. 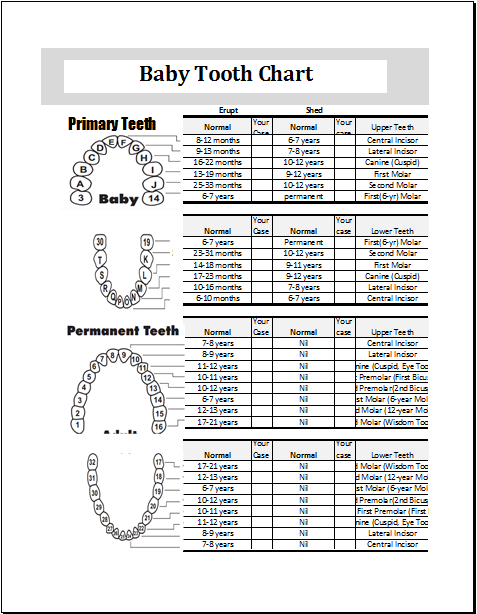