A human fetus starts a movement as early as nine weeks of age, but the mother cannot feel its movement until the second trimester. If the mother is primigravida or conceiving for the first time, she may feel the fetal kick around the 20th week of pregnancy which roughly makes the fifth month. Multigravida mostly feels fetal movements earlier than 20 weeks.

There are certain conditions in which the patient may feel decreased or no fetal movements which are a dangerous sign. If a pregnant woman in her third trimester or after 20 weeks of gestation comes to the hospital and says she is not feeling her fetus moving, the doctor must take it seriously and take necessary steps to find out the cause and then manage her problem.

Causes of decreased or no fetal movements

Here, we will discuss some of the most common reasons for absent or decreased fetal movements.

Fetal demise is one of the most common reasons for absent fetal movements. This is considered as the first sign of fetal demise when a woman comes and complains that she has not been feeling her baby moving inside her womb. The second and third trimester is especially important, and the mother is always counseled to come to the hospital if she does not feel any movements for 24 hrs. Fetal demise is then confirmed on ultrasound examination and the patient has to undergo termination of pregnancy.

Intrauterine growth restriction is one of the most common reasons for decreased fetal movements. Intrauterine growth restriction or IUGR is an umbrella term and covers a number of reasons for decreased fetal movements especially in the third trimester or pregnancy. IUGR babies are due to maternal hypertension or pregnancy-induced hypertension, gestational diabetes mellitus, placental insufficiency, and fetal congenital anomalies.

First line treatment of this complain is conservative management. If a patient comes with the complaints of decreased fetal movements, she is ideally admitted in the hospital and her fetal surveillance is required. The patient is given intravenous fluid if her hydration status is not satisfactory. Most of the times hydration relieves the complaints in the absence of other obstetric or medical complications. Meanwhile, fetus, as well as mother, is investigated to know the cause of reduced movements.

Patients have to get an ultrasound for a biophysical profile of the fetus in which all the parameters are checked, and the mother is counseled at every step. Mother is given a fetal kick count chart in which she marks every movement of the fetus within a given period.

This is also a way in which the mother becomes satisfied with the movements. If movements turn out to be reduced on the chart, fetal surveillance is continued and the cause is treated immediately as soon as possible. 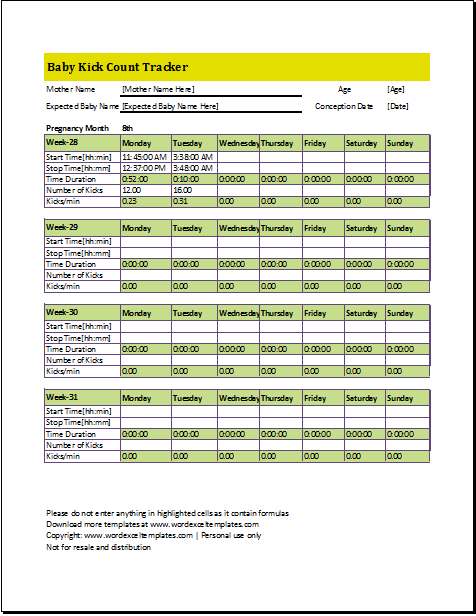